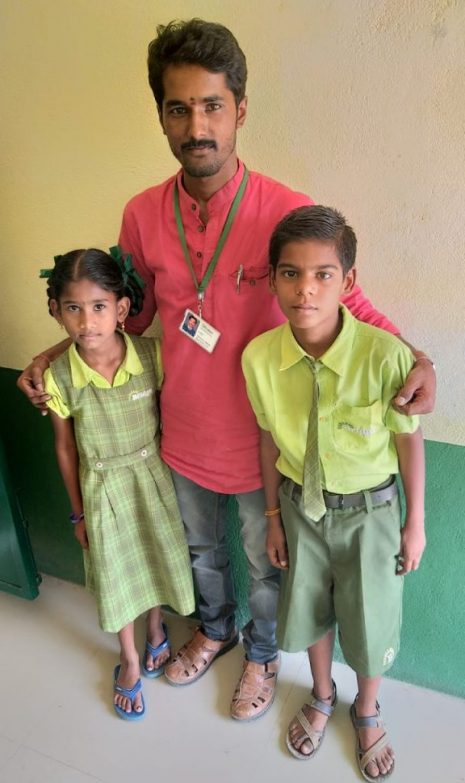 At Bridge, we say ‘Bridge Cares’ and it’s really true! Here is one of the many stories we see every day in our academies which shows how those at Bridge care and go above and beyond, especially for children who are in need.

Teacher (above centre) Hari Kandhagal at Bridge, Moriganipalle has been more than a teacher for these two children who have struggled to overcome the suffering and loss of their parents. Naresh (right) is an orphan who lost both of his parents when he was an infant. Deepika’s (left) father sadly abandoned her family and her mother is bedridden with serious burn injuries she sustained a few years ago.

Education was a distant dream for these kids when survival was a day-to-day struggle for them. Naresh was taken care of by his elder brother and grandmother while Deepika was given shelter by her aunt.

Despite this they managed to attend a public school but they struggled to get any attention—academic and pastoral—because classes were overcrowded. Fortunately, they both joined Bridge, Moriganipalle and came across a teacher that would give them the support and additional care they both craved. Hari saw that they were struggling and went out of his way to give them the extra care and support they needed to thrive, both in and out of the classroom. He noticed that they were both particularly strong students and took special care to draw that out of them. Both these children are now writing their final exams of Standard 4.

Deepika and Naresh now speak in English not only in the school but even in their respective communities. They’re confident that they can achieve their goals when they grow up, all thanks to their teacher Hari.

“I have almost adopted them as my own children and made all the efforts to build confidence in them. Now they are very curious pupils who want to learn new things every day,” says a proud Hari.

You can find out more about which cookies we are using or switch them off in settings.

This website uses cookies so that we can provide you with the best user experience possible. Cookie information is stored in your browser and performs functions such as recognising you when you return to our website and helping our team to understand which sections of the website you find most interesting and useful.

Strictly Necessary Cookie should be enabled at all times so that we can save your preferences for cookie settings.

If you disable this cookie, we will not be able to save your preferences. This means that every time you visit this website you will need to enable or disable cookies again.